Using an iPad to improve Webex presentations – especially the Whiteboard

Firstly, understand that Webex is an ancient online video collaboration tool with enough basic features to allow you to present PowerPoint slides (so long as they are saved in the correct format) to a live online audience who either listen online or over the telephone after signing in to the meeting online.  When you present slides in Webex, your PowerPoint slides loose all animation and the best annotation tool available is a pointer that displays your name. 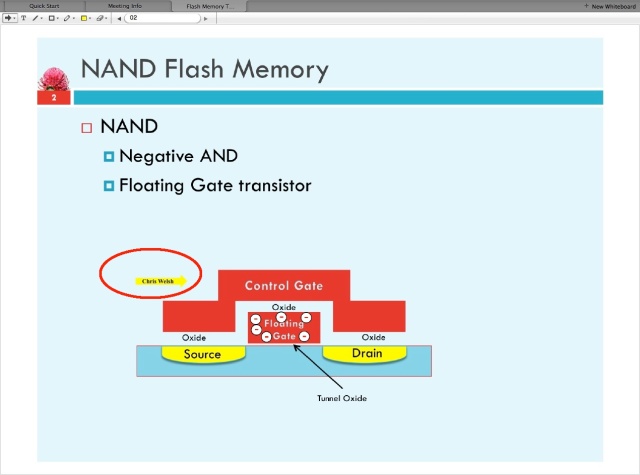 Fig 1: Webex Interface. The best annotation tool available is a pointer that displays your name.

While presenting your PowerPoint slides, you can click on part of your slide to make you pointer visible to the other participants.  The presenter also has the power to grant other meeting participants privileges to also click their pointers on the screen, or use the basic annotation tools which consist of typing text, drawing lines and boxes and a highlighter/scribbler.  However, it is particularly the annotation tools that fall down.  You can click on your slide and drag to draw a line, but neither you or any other participant sees the line until you lift your mouse/finger to finish the line.  And once drawn, you can’t move it, change its colour or direction.  Copy and paste the line to another part of the screen? Not supported.  Typing text is even more frustrating – you create a text box and begin typing.  Now even ancient NetMeeting (think Windows 95) had the ability to present the text you were typing in real time to the other participants in the meeting, but not Webex – oh no, with Webex, the typing does not appear on the other participants’ screens until you click away from the text.  Need to change the text, correct a spelling mistake? Increase the font size?  Too bad – Webex does not allow any of that.  The most useful tool is the eraser, which at least allows you to delete an entire block of text or object in a single click.  Oops! Wrong one deleted?  Too bad there is no “undo”. 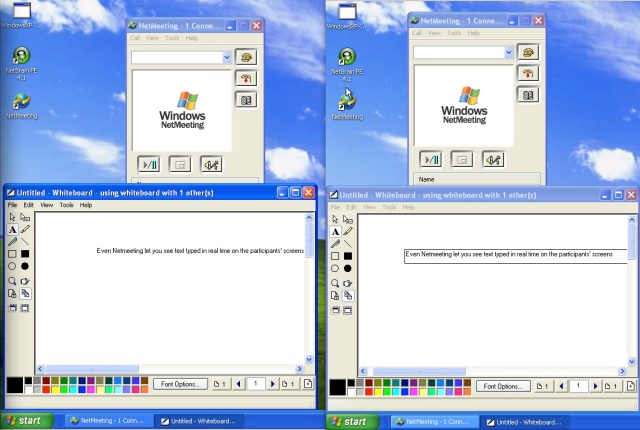 Fig 2: Even ancient NetMeeting (think Windows 95) had the ability to present the text you were typing in real time to the other participants in the meeting

The Webex Whiteboard function gives you exactly the same ugly animation tools but on a blank canvas.  And it was this lack of functionality that made me think of using a shared whiteboard drawing tool that I might be able to access from my iPad.

My search for a decent “whiteboard” application let me down a couple of paths.  At first I thought I’d found the perfect answer – http://awwapp.com/draw.html – I could draw on my iPad with simple tools and share this content with anyone by sending them a link like http://awwapp.com/draw.html#47e146d0.  And since Webex has a “Share Web Content” option I thought this would be ideal – I could share this webpage just like the whiteboard and presentations, but be doing the drawing on my iPad.

But of course my first mistake was that I expected it to work.  Sure – Webex lets you share a webpage like http://rednectar.net, but NOT a page like http://awwapp.com/draw.html#47e146d0 – the hosting computer sees “404-not found”, while remote PC clients see a blank whiteboard.  Remote iPad clients using the iPad Webex app see an informative message saying “The content of the presentation is not supported” – or translated “You should have more sense than to expect Webex to support html content on the iPad – after all, the iPad has only been around for four years“.  (The iPad Webex app can’t even display pages like http://cisco.com if shared on Webex from another computer).

Fig 4: My first mistake was that I expected the Webex “Share Webpage” to work.  Sure – Webex lets you share a webpage like http://rednectar.net, but NOT a page like http://awwapp.com/draw.html#47e146d0 – the hosting computer sees “404-not found”

Next stop – share my browser instead.  I’d have my iPad displaying the shared awwapp page, and my Webex host PC displaying the same page – which was shared over Webex.  Now the result was “successful” but less than “satisfactory”. The content shared OK, but the drawing was a little laggy – and well, the web based app had less drawing options than Webex – but at a pinch – if you really wanted to draw on your iPad and display in your Webex meeting, you could.

Undaunted, I thought I’d explore the iPad Webex app a little further, and passed the host role to where I was logged in on my iPad to see if the animation tools and Whiteboard would be better on the iPad.  As it turns out, they are not only “not better” they are “non-existant”.  The iPad Webex app simply does not even have the most basic of annotation tools available.  In fact it is worse than bad – the iPad can’t even take control of an already uploaded presentation – all it can do is share content (not apps – so I couldn’t share a whiteboard app).  And when you do share a PowerPoint presentation, it gets turned into a continuous scrolling pdf file, so it not only looses animations, gets reformatted so that only about 90% of the slide fits on the screen and, it looses the ability to move through a “page” at a time.  This lack of pagination means that if you are presenting from the iPad, be prepared to wait minutes for your remote screens to catch up if you scroll through a lot of pages quickly.  The one good thing about sharing from the iPad is that it does have a very neat and responsive “laser pointer” that shows up on the participants screen when you touch your finger on the screen. 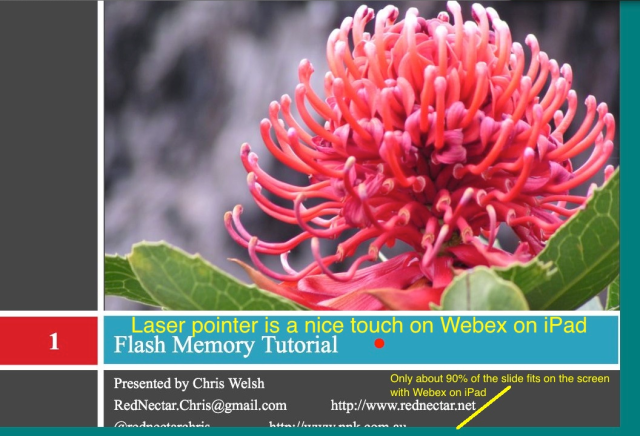 Fig 5: Only about 90% of the slide fits on the screen using the Webex iPad app, but it does have a very neat and responsive “laser pointer”

So I gave up on the iPad Webex app. I had to find a better approach.  I began thinking “Is there a way to display my iPad screen on my computer?” Because if I could do that, I’d be able to share the app that did that on Webex.  And I know there is a plethora of drawing applications for the iPad.

Enter “Reflector“.  What a great little app this turned out to be.   After trialling it for a few minutes, I forked out the $12.99 and bought it.  I have a Mac, but it is available for Windows as well.  And it turns your computer into an Airplay device – and of course it is dead easy to send the screen of your iPad to any Airplay device (so long as both are connected to the same wireless network).

So now I can tell Webex to share my Reflector application, and my audience sees my iPad screen – and if I display a whiteboard application on my iPad, my audience can see it – there is a bit of a lag, so it is not as good as if Webex had have provided the tools their customers deserve, but it is still streets ahead of the native Webex whiteboard – so long as you can find a good Whiteboard app for your iPad.  I found several, and have a summary of them at the end of this article.

Fig 6: Now I can tell Webex to share my Reflector application, and my audience sees my iPad screen

An added bonus is that I can now use Slideshark on my iPad to present my slides (including animations) – just like I do in a face to face class. SlideShark also has some basic annotation tools – not brilliant, but easier to use than Webex because they are finger/stylus controlled on the iPad rather than mouse controlled on your computer.  The disadvantage of this approach as apposed to uploading your PowerPoint slides to Webex is that there is a longer lag between switching slides than there is if the slides are uploaded – but at least your slide animations will work!  SlideShark also has a feature where you can hold down your finger on a slide to produce a moving “laser dot” pointer – but to be honest I found the lag so bad I didn’t use it.

I’m sure there are better web based lesson presentation tools out there, (GoToMeeting?) but I have to use the tools that my customer wants, and the customer that wants me to use Webex is not going to want to use anything else, so I’m stuck with Webex.  So my recommendation for using Webex are:

Here’s the iPad whiteboard/drawing applications I tried.  You may find something better, but you can see the features that I wanted listed in the table.  I’ll do a more thorough review of the these apps in a future post.

ShowMe has the closest feel to a real whiteboard.  A good selection of colours a single tap away, and flicking between multiple whiteboards is easy – unless you have too many of them.  Apart

InkPad is quite powerful, but typing text and drawing shapes is clumsy – you have to change tools after drawing a shape or text if you want to resize it – once you get used to it is pretty good if you want to work with shapes – so long as you don’t want to resize them.  It has support for multiple drawings, but you have to return to a gallery page to change drawings.  I’ve used it to produce semi-animated content where I fill and empty shapes to show how flash memory works.  Inkpad takes a bit of getting used to, but is quite powerful once you are.

Jot!Free has adds, and no amount of cajoling would let me even pay for an upgraded version – the link from the free app didn’t work.  However, I guess if you pay the $5.49, you’d loose the adds.  You have to know the secret code (tap two fingers) to be able to add text, but doing so is easy.  And line or text can be easily moved about or deleted by holding down a finger on the object/text

Vittle Free has by far the most awesome resize feature.  You use a tool to select an area by dragging your finger around, and you can then either move, rotate or resize the selected portion.  The paid for version ($8.49) probably has more features, but the free version wasn’t bad.

Educreations is also a great app – and free.  It has a scroll up/down function, but no zoom – so it is possible to scroll your work off the screen, and can be a bit hard to find it again.  Its text writing and moving capabilities are great, but you can’t cut or move any drawing lines.  Lines are of fixed size – just like a whiteboard, so to me that’s not a problem.  Having a few more feat

WB Mojo is the only drawing app I paid money for – a whole $1.99.  But it has a powerful set of features as well as being able to do simple drawing stuff easily enough.