Finding text within a paragraph or word in MS Word

When using wildcards to search for text between two specific markers, MS Word will find those markers and that text no matter how far apart they are.

If you want to restrict the search to finding that text/markers within a word or a paragraph, you need to be a bit clever about how you search, and think in the negative.

Find within a word

In my case, I wanted to find any place where I had used two carat characters (^) in the same unbroken string of characters, and prepend the first of those characters with a backslash. Turns out the replacement was not so easy either.

FWIW – this was the context I in which I was searching. I’ve highlighted the ^ characters for you.

Spoiler: the result looked like this – which will find text within any word that has two carat characters (^) 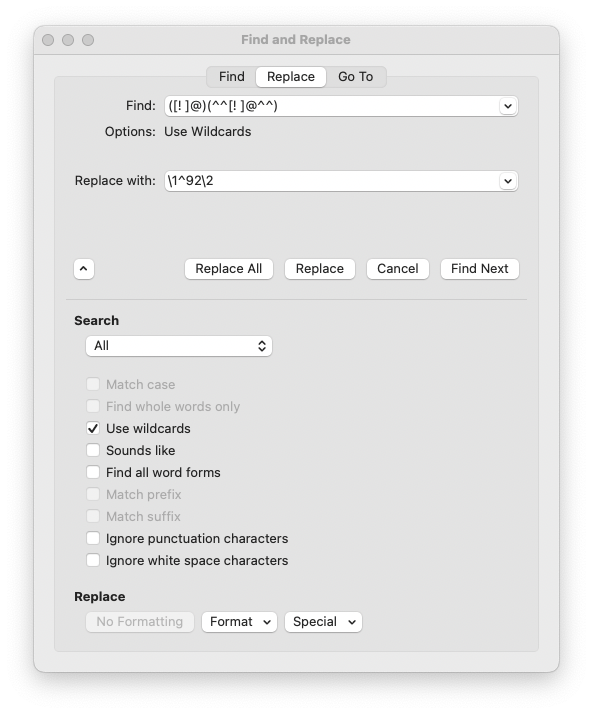 So let’s unpack this. The find pattern above is

Firstly, I’ll remove the parentheses – they come into play for the replacement part.  That leaves us with

Because the carat character is considered a special character in word search and replace, ^^ is actually searching for a single ^ character

So the whole sequence reads:

That’s the “find” part sorted. But why the parentheses?

The thing is, I want to insert a backslash before the first ^ character, so I have to group by search with () – the first group being all the characters up to, but not including the ^ character. ([! ]@) and the second group being the rest. (^^[! ]@^^)

The next problem is the replacement part.  For that I use the special MS Word tags \1 and \2 which correspond to the first and second search groups respectively.  But that causes another problem – I actually want to USE a backslash character in my replacement string – and of course it too is a special character. So you’d think, using the logic that if ^^ finds a single ^, then ^\ (or even \) would do in the replacement section to insert a backslash.

But also no. Instead, you need to flash back to when you memorised the set of ASCII characters and remember that the \ character is character number 92

So now I can specify that my replacement string is

Find within a paragraph

The logic is exactly the same, except this time I need to search for “anything that is NOT a paragraph marker.

MS Word uses the special combination of ^p to mean “paragraph marker” – but it is NOT available when using wildcards!  Instead, I have to go back to that wonderful ASCII set and remember that a CR (carriage return) character is number 13.

You don’t need to read why I was doing this.

I’m in the process of converting some documents to asccidoc.

In asciidoc, the ^ characters are used to delimit superscript, so my original line of

is rendered in asciidoc format as

I needed to “escape” the leading ^ character for it to render correctly.

I this site a great help when figuring this out https://wordmvp.com/FAQs/General/UsingWildcards.htm