I know there are quite a few people out there waiting for a GNS3 WorkBench update.  I promised that it would come soon after GNS3 0.8.5, but there have been a couple of significant developments that have caused an equally significant delay.

When I first created GNS3 WorkBench, I had three major objectives:

Since then, things have changed.  Firstly, the GNS3 “all-in-one” Windows version has been around for a long time, and is far more stable than those early windows versions.  Secondly, the objectives for the ICND1 and ICND2 exams have undergone major changes, meaning I have had to re-work all of my prepared exercises.  Thirdly, GNS3 has evolved to the point where the shortcomings I set to overcome have been met (albeit often through my incessant pestering of Jeremy Grossmann to make changes).  Specifically:

The good new is that the GNS3 WorkBench concept can now be reduced to a set of exercises relevant to various levels of study, suitably packaged to match the directory structure that supports VPCS, Instructions and Snapshots.

The significance of this is that, when I complete the re-packaging, GNS3 WorkBench will be available for the first time as an OS X or Windows package – just download to your GNS3 Projects folder and you will be able to use the GNS3 snapshots function to load an exercise, and use the VPCS integration to check your answer.  Instructions will appear automatically in your browser whenever you open an exercise.

That’s not to say that I haven’t forgotten the Linux Virtual Machine.  It will be available as a Linux Mint 15.0 VM, with GNS3, Dynamips, Oracle VirtualBox, Qemu, Vyatta, Linux Microcore and openvswitch already installed, and script files to help you add ASA and Junos images.  There will also be some pretty shortcuts on the desktop and some other nice cosmetic touches that you won’t get in the Windows or OS X packages. 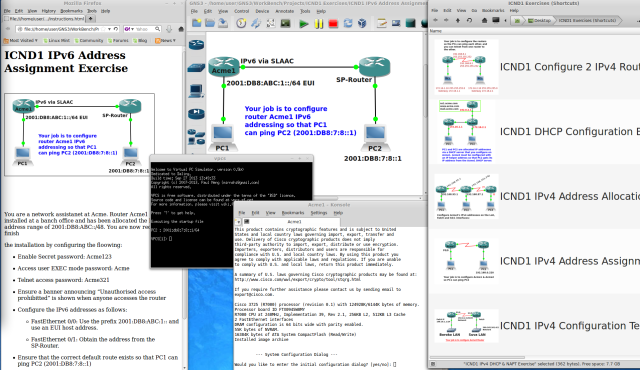 There will also be an install script that will allow you to start with your own copy of Linux Mint and turn it into a GNS3 WorkBench.  It might even work on Ubuntu.  This is particularly to help people who have limited bandwidth and find it difficult downloading a bloated appliance.  Mind you, the script runs a lot of downloads too, but at least if it fails you can run it again and skip the bits you have already downloaded.

So I’m asking all my dedicated followers to be patient a little bit longer, it is currently taking me over an hour to process each exercise and instructions set into the new format, especially if I get carried away adding new tasks or writing VPCS scripts to check answers.  In the meantime, why don’t check this link, and see why I have had precious little time to devote to GNS3 WorkBench lately. 🙂